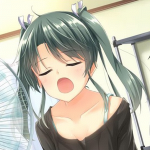 I am the lead writer and senior GM for the TNU storyline and Role-Plays. My name is Josh or on the internet I am known as RisaXSeph on anime communities, Commander Tom (A joke on my middle name) on some game communities or Ari Chirison in the Face of Mankind Community. I use to own and operate DIMS. Now I manage the IGA’s administrative operations and am the President of the nonprofit (The IGA and Risa Project (My small community) manage the forum that TNU is currently housed on). I attend Portland State University focusing on Community Health Education. I like to watch people and chat with them as well as play some MMOs, First Person Shooters and the like. I also moderate quite a few Disqus Comment Communities… Disqus really is a great system… You should use it. Outside of the internet I help out the PSU student government, like hiking, photography, old TV shows, table-top role playing and very rarely playing my PlayStation 3 (I still have not finished Persona 3)… Even more rarely I go swimming; water is pretty cool. I tend to come off as a hard-ass and a pompous ass sometimes but I really am a pretty chill guy; I just take rules seriously is all I also don’t take being threatened very well or any attempts at trying to overtake things I manage (My parents think I have control issues… I am going into to much detail about myself) … After all no one enjoys falling into a pit of acid for not paying attention to “WARNING: Steep Dropoff” signs; GG bro; you’ve successfully been done in! My online username on anime communities came from two characters in one of my RPs (Risa Ward and Persephone Branchwood); they were suppose to become a couple but it never happened cause the story died.

“You have to do what you enjoy; if you do not do something you enjoy then you are only sustaining yourself and not really living.” – I forgot who said this

Lastly for those that wonder what my display pic is on the forums and chatango; its Zuikaku from KanColle. Before that it was Totori Helmold and Rorona Frixell from the JRPG Atelier Totori. Previously it was Estelle Bright from the Trials in the Sky games, before that it was Eru Chitanda from the anime Hyouka and before that an old picture I had; a picture of Shana from Shakugan No Shana S. Now a bunch of qoutes from my RP characters :D….

“Cheer up, life is too short to be sad all the time.” – Misuki Raion, The TNU Project

“So you only care if I live for your own self preservation…” – Yukari Ashlon (CG: FFT, CO AAS Justice)

“A name is only as important as the person it describes… so when someone asks for your name you know your important.” – Hoshi Ki-Kari; Kiru-Acu: Blissful Shadows

“You thought the world would be better off without you... I understand that now but you know it’s not true... The world is better with you in it.” - Yukari Solaros

Retrieved from "https://tnu.fandom.com/wiki/User:RisaXSeph?oldid=5610"
Community content is available under CC-BY-SA unless otherwise noted.